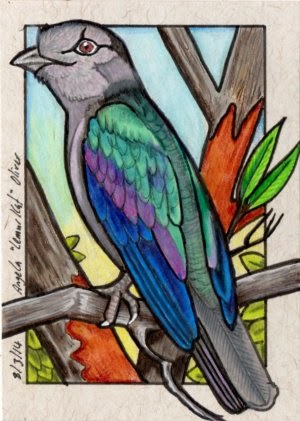 The Cuckoo Roller, or Courol, is a medium-large bird found in Madagascar and the Coromo Islands. Bright, brash and bold, he inhabits any forested zones, from rainforest to plantations. His main diet consists of insects, locusts, lizards and chameleons. When foraging he sits quiet and still, eyes ever watchful and awaiting any sight of potential prey. He then pounches, snatching it up in his broad bill and beating all resistance out of it before gobbling it down. Usually seen in pairs with the more dully coloured female. Nests are constructed from tree hollows, with no lining and only the female incubates whilst the male brings her food. Chicks hatch fluffy and fledge after 30 days.

We met our one and only Cuckoo Roller in Perinet (Andasibe), when he followed us for some time and then, when our chameleon-loving companion remarked "we haven't seen any chameleons today" decided to perch beside us with a tiny one in his beak, pose with it and stare at us for a good 30 seconds, then gobble it down.