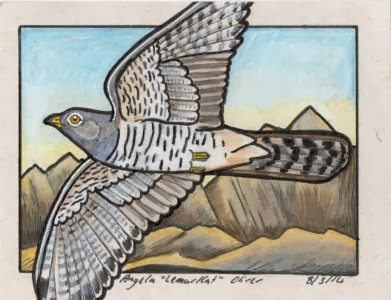 The Cuckoo is a migratory bird with a very clever breeding system: she allows other birds, of unrelated species, to hatch and raise her young. This earns her the name of "brood parasite". During the winter months, she leaves the breeding grounds in search of warmer climes, returning in spring to lay her eggs. Her chosen hosts are small passerines, such as warblers, robins and dunnocks. These birds are fast breeders - usually laying 2-3 clutches per season - and her arrival coincides with their second clutch, giving the host species a chance to raise their own young first, unhindered. When the host leaves her nest for a short period of time, our cuckoo swoops in, laying her egg amongst the others. Different birds favour different hosts, as their eggs mimic the host's in appearance. Her chick hatches fast and large, demanding the parents' attentions and monopolising the food, so that his rivals either starve or are forcibly evicted.

Not all cuckoos are brood parasites - their relatives include the ani (who nest share), the coua (who raise their own chicks) and the guira cuckoo (who also nest share - someetimes with Ani). Other cuckoo cousins I may draw at a later date include the koel, the roadrunner, the turaco, and the malkoa. I have skipped the coucal, however.
Posted by LemurKat at 6:37 AM