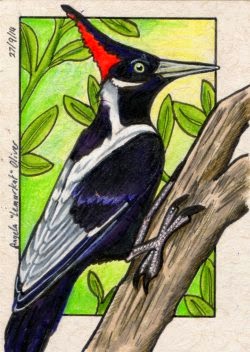 The Ivory-billed Woodpecker was one of the largest woodpeckers in the world. He lived in hardwood swamps and pine forests and was once widespread across the virgin forests of the southeastern United States. Deforestation by the timber industry destroyed his habitat and reduced his numbers dramatically. He used his sturdy bill to hammer, wedge and peel the bark off decaying trees, seeking the wood-boring beetle larvae and insects within. A single pair needed a territory of approximately 25 square kms in which to feed their young and themselves. Various expeditions and anecdotal sightings have occured, with video footage recorded in 2004 confirming that there may still be a few of these impressive birds in existence.