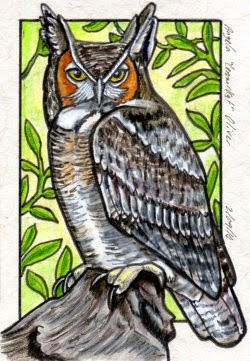 The Horned Owls are the most widely distributed "true owls" in America. There are two species - the Greater and the Lesser - and numerous sub-species, occupying much of North and South America. Highly adaptable, she favours forested areas. She is one of the larger owls and her barred colouration offers her substantial camouflage, especially during the day as she sleeps. If crows can locate her daytime perches, they will mob her aggressively, endeavouring to chase her from their territory. At night, she calls several times before taking to the wing to hunt for small mammals such as cottontails and voles.

You are my touchstone in a number of ways. You consistently create beautiful and precisely rendered artwork. Your work is precisely drawn, but you never sacrifice artistry for mere realism, and that is of SUCH tremendous value to me. When I'm feeling as though my work is stuck, I stand up and go look at one of your pieces in my collection. Magically, the cobwebs clear and I am refocused. So thank you for continuing to present your art - the painted AND the written form - you make a real difference in my world.