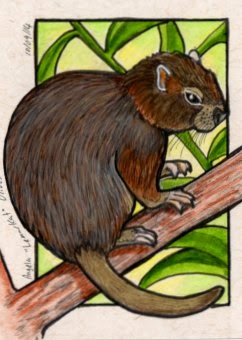 The Hutia are large cavy-like rodents of South America. There have been 20 species identified, of which a full third are extinct and almost all the remaining species are endangered. The exception to this is Demarest's Hutia of Cuba. He is widespread throughout his range, and was once hunted for food and even raised as a stock animal. In some areas he is still abundant enough to be considered a pest and can cause damage to crops. His diet is omnivorous, consisting of bark, leaves and fruit with the occasional small vertebrate. Unlike many reodents he does not burrow, but spends the nights sleeping in tree hollows or rock crevices. You ng are born fully furred and with open eyes.