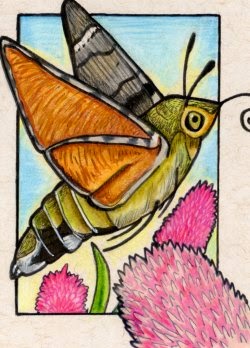 America has the Hummingbird, Eurasia and Africa have the Hummingbird Hawkmoth. Due to his size, proboscis and the humming noise he makes in flight, he does bear quit a resemblance to his namesake. This is an example of convergent evolution - where two unrelated creatures develop similar traits to adapt to their environment. He is a diurnal moth, spending his days foraging on nectar-rich flowers. His visual abilities have been the product of much research and he has the ability to learn and recognise colours - useful when looking for flowering plants. During the summer he is widespread, but as the weather cools he migrates south to warmer climes.