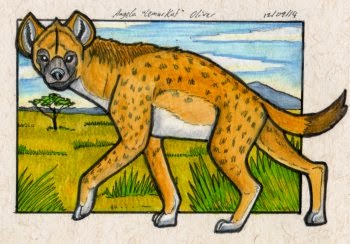 There are four species of Hyena, all of which will receive their own separate entries, so for this one I will be focuing on the archetypical Hyena - the Spotted Hyena. A pack of Hyena is known as a "clan" and can contain up to 80 individuals. They are one of the few mammal species in which the females are the dominant members of the hierarchy. She is primarily a hunter, but is also an opportunistic scavenger. Her jaws are very powerful, stronger than a leopard's and capable of crushing bone. She is very efficient at disposing of carcasses. Females are promiscuous and generally favour younger males or those more recent to the clan. Cubs are born fully furred with open eyes and equipped with canine teeth. From the moment they are born, they will try to kill their siblings. This adds an additional level of challenge to the mother's job.