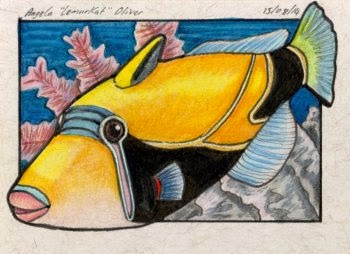 The "rainbow fish with the pig-nosed snout", also known as the reef triggerfish, the Humuhumunukunukuāpuaa is the state fish of Hawaii. He is distributed across the Indo-Pacific region, where he inhabits tropical reefs. He can wedge himself into quite small crevices, and will lock his spine to make it difficult to dislodge him. His main diet is invertebrates buried in the substrate, and to uncover these he blows jets of water from his mouth. He will also sift sand through his mouth. Aggressive in nature, he leads a relatively solitary existence. When healthy, his colouration is at its most intense, and if frightened or sleeping it fades, allowing him some measure of camouflage.