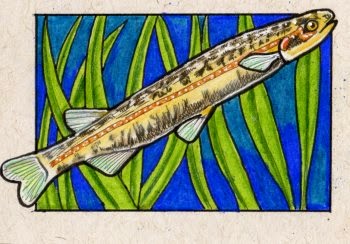 Inanga are are common species of Galaxias fish, widespread across the southern hemisphere. She can be found in freshwater streams and lakes, favouring still or slow-moving bodies of water. During the high spring tides, she lays her eggs on vegetation. There they remain, exposed to the air, until th enext spring tide. At which point they hatch, and the larvae are swept out to sea. For 5-6 months the larvae live at sea, developing into juvenile fish. These "whitebait" then swim upriver to find suitable habitat, feeding on crustaceans and molluscs until they attain adulthood, spawn and, shortly after, die. Whitebait are often netted and are a considered a delicacy in New Zealand (although I am not sure why - the big black eyes peering out from the fritters ruin my appetite) and the adult Inanga is also threatened by introduced species such as trout.