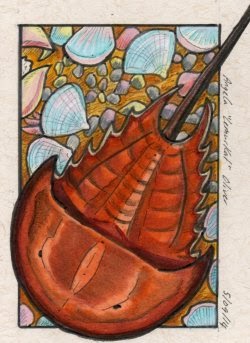 Despite its name, the Horseshoe Crab is not a crustacean but belongs to an ancient Class of arthropods known as Xiphosura, of which there are only two surviving species. They are, in fact, more closely related to spiders than crabs. These bizarre creatures spend most of their lives at sea, swimming upside down and foraging on the sea bed for worms and molluscs. Once a year, however, they come ashore in great numbers to breed. The male finds and mount a female, fertlizing her eggs as they are laid then buried in the sand. Females can lay 120,000 eggs in this one night - which is a good thing, because the next day the sea birds descend to feast. Horseshoe Crabs will occasionally by upended, and once on their back they rely on their long tail to help them back upright again. Those with broken tails are likely to become dessicated beneath the sun.
Posted by LemurKat at 10:21 AM