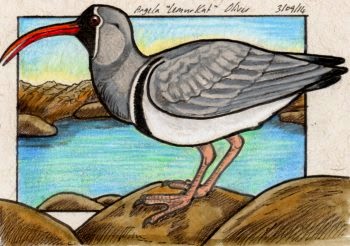 The Ibisbill is a wading bird closely related to the avocet. He generally leads a solitary life across southern Central Asia, living near slow-moving rivers. Here he uses his slender bill to probe amongst rocks and shingle in search of insects and their larvae. During the breeding season he forms a monogamous partnership and eggs are laid in a shallow scrape, sometimes lined with pebbles. Both parents share incubation duties and it has been reported that offspring from previous years may assist in the task. Ibisbill prefer to swim across rivers rather than flying.