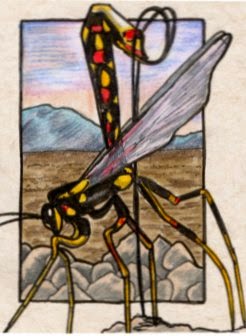 The Ichneumon are a Superfamily of wasps, containing over 80,000 species. These insects are solitary and quite large. Many are parasitic. Females are characterised by their extremely long ovipositors. When she is ready to lay her eggs, she will seek out the larvae of a different species: caterpillars, beetle larvae, maggots. This ovipositor is then used to deliver her eggs either directly into the host or near the intended host. When her larvae hatch, they consume the host from the inside. Some Ichneumon prey on ants, entering the nest and depositing her eggs by releasing a chemical that confuses the ants and causes them to fight amongst themselves, rather than target her. Many also infect the host with a virus that suppresses its immune system.