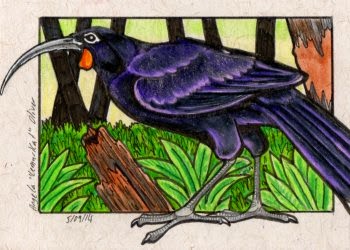 The Huia was a wattlebird, once found in the North Island of New Zealand. It was remarkable in that the bird's beaks showed sexual dimorphism - the male's was short and stout, the female's long and curved. The male used his adze-like beak to chip away at decaying wood to reveal the invertebrates hidden within, whereas the female used hers to probe into crevices. The two did not feed cooperatively, but this manner of foraging meant that neither were in direct competition with the other and could best exploit their available resources. Huia were prized for their tail feathers, which were treasured amongst the Maori. When the Europeans came, bringing with them rats and stoats, they also took to hunting this unique bird. Alas, the scarcer the Huia became, the greater the demand for their skin. The last confirmed sighting was in 1907, with several unconfirmed since.
Posted by LemurKat at 9:35 AM