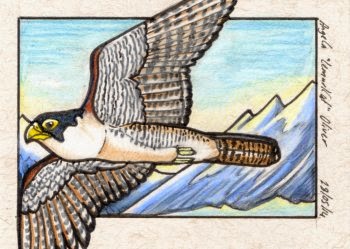 Falcon is the name for smaller raptors with tapered wings, which offer them quick manoeuvrability. The most well known and widespread species is the Peregrine Falcon, depicted here. She is the fastest moving creature on earth, capable of reaching speeds of up to 320 km/hr when diving. Her main prey is other birds, often up to the size of a duck or gull. She descends sharply, striking her prey with a clenched foot, the impact stunning or killing it. Smaller prey is then caught in mid-air and carried away, larger prey is consumed on the ground. She will pluck out the feathers before consumption.