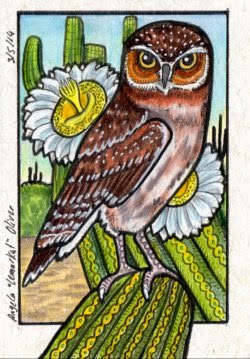 The American Elf Owl is the world's lightest owl. He makes his home in the arid Southwest of America, and into Mexico. His main diet is insects and other arthropods, caught on the wing or plucked from the ground or branches. During breeding season, he sings to attract a mate, and together they find a natural cavity or woodpecker hole to nest in, either in a tree or a cactus. The pair will often call to each other as they flit about their relatively small territory. Clutches usually consist of three white eggs, and the chicks grow fast, fledging about a month after hatching. To encourage their youngsters to leave the nest, the parent birds may refuse to bring them food, although they continue to feed them outside the nest, until they have learned to hunt for themselves.
Posted by LemurKat at 8:48 AM

So adorable! Was this owl inspired by your US road trip?