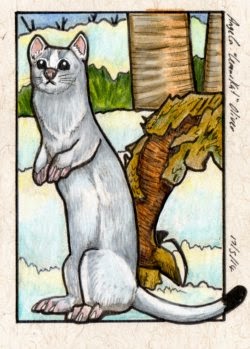 Ermine is the name given to a Stoat in his winter fur. He is naturally found in the tundra and taiga of North America, Canada and Eurasia. Much of the year he wears a brownish coat, but as autumn comes he sheds this brown fur for a new coat of white; the only part that does not change is the black tip of his tail. This winter pelt is thick and dense, providing both warmth and excellent camouflage against the snow and as such he was once rather desirable to trappers. He is an opportunistic predator, with prey ranging in size from tiny voles to adult rabbits. Specimens were released in New Zealand in the 1800s in an effort to combat the rabbit populations and they flourished, pillaging the native fauna and pushing many flightless birds to the brink of extinction - and beyond. He now ranks among the Top#100 invasive pests.
Posted by LemurKat at 7:30 AM