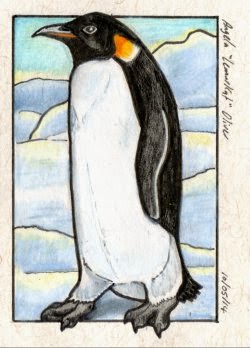 The Emperor Penguin is the tallest and heaviest member of the Penguin Family. He lives in the Antarctic, spending much of his life out at sea, hunting for fish and squid. During the Antarctic winter, both males and females come ashore and make the long trek to their breeding grounds. Here thousands of individuals will gather, find a mate and lay a single egg. Due to the harsh cold of their environment, these birds cannot build nests, and the egg is incubated by the father, balanced on his feet and kept warm with his feathers. Large colonies enable the birds to withstand the harsh cold, and the female forages at sea while the male hatches the egg.The pair then take turns with one caring for the chick while the other feeds, the long trek getting shorter as the winter reaches its end.