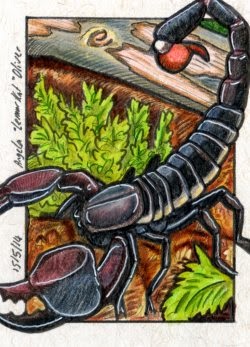 The Emperor Scorpion is one of the largest scorpions in the world, growing to an average of 20cm long (EEK!). He can be found in the rainforests and savannah of West Africa. Thankfully, his sting is merely painful, not fatal. He buries himself in the ground during the day, hunting for termites and other insects at night. To feed, he grasps the prey in his pincers, injecting it with poison that liquifies the internal structure within the victim's exoskeleton. Cannibalism is not uncommon, females will eat their mate or their own offspring, and males will sometimes kill each other. Popular in the pet trade, the Emperor Scorpion has been pillaged from the wild and is now considered endangered.

Well you told me yesterday it took a couple of attempts well I love it and would like to buy :)

Hi Kershla!
It was nice to chat with you yesterday and thank you for remembering to look me up! I'm not sure you've seen the infor, but I sell these cards at $10 each. If you wish to drop me an email - lemurkat@gmail.com we can organise a pick-up or what-not.

Thank you for your interest in my art, I hope your own drawing goes well.