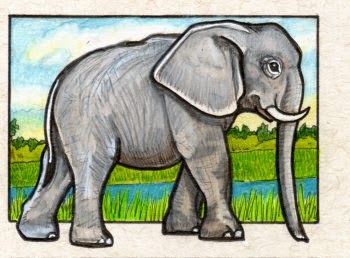 The Elephant is the largest land animal, with African Elephant bulls weighing in at 7,000 kg. Cows are somewhat smaller. She is characterised by her trunk, actually an extension of her nose and upper lip, a most versatile appendage indeed. It is used for breathing, scenting, to manipulate objects, to inhale water for drinking and showering and also in communication, both verbal and physical. Elephant cows are social creatures, living in herds led by the matriach, usually the oldest and wisest of the herd and accompanied by their calves. Due to the nature of their foraging, African Elephants must lead a nomadic existence, travelling across the savannah and through marshlands, open forest and even up into the mountains or towards the coast. With their size and social behaviour they have few natural predators, but have been hunted extensively by humans for their skin, meat and their ivory tusks.
Posted by LemurKat at 8:42 AM

perfect! A big animal for a significant milestone. Happy #200!