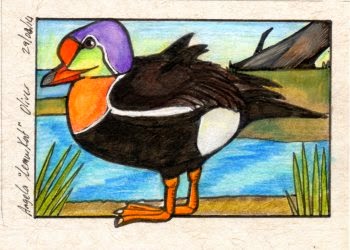 The Eider is a large sea duck, of which there are three species. This fellow is the King Eider, named such for his bold colouration. In spring, flocks of these elegant birds migrate to the Arctic tundra to breed. Nests are a scrape in the ground, lined with down feathers plucked from the female's breast. These soft and warm feathers have long been harvested and used to stuff quilts and pillows, a practise that is fully sustainable as they are collected from the nesting grounds after the ducklings have left the nest. After breeding has concluded, Eiders return to the sea where they dive for benthic invertebrates: crustaceans, molluscs and polychaete worms. Winter flocks can number 10,000 birds.
Posted by LemurKat at 8:42 AM