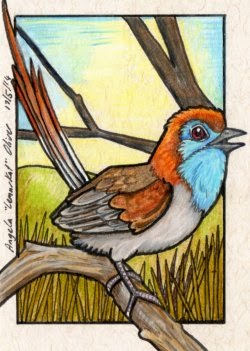 The Emu-Wren is named for his tail feathers, which resemble the feathers of an Emu. There are three species, all endemic to Australia and this fellow, the Rufous-crowned Emu Wren is the most colourful. His mate sports a more dowdy plumage, lacking the blue and with her rufous crown being rather more subdued. He is the smallest Australian bird, weighing in at a mere 5 grams. Shy and secretive, he inhabits spinifex shrubland, scuttling through low shrub cover in pursuit of insects and sometimes being mistaken for a mouse.
Posted by LemurKat at 6:43 AM