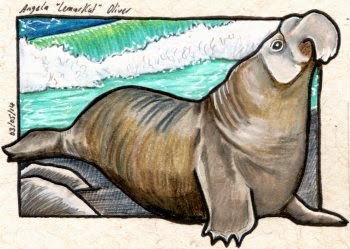 There are two species of Elephant Seal. The Southern Elephant Seal bull is larger even than a polar bear, weighing up to 4,000 kg. The bull is characterised by his fleshy proboscis.  Every breeding season he comes ashore to establish a patch of beach for their harem. This territory is fiercely defended and he will not abandon it, even to feed, surviving instead on his blubber reserves. Clashes involve a great deal of posturing and roaring, occasionally coming to blows. In fighting, bulls use their weight and canine teeth against one another but, despite looking brutal, the loser often departs with nothing more than a few new cuts and scars. Meanwhile, the females arrive to give birth to the pups conceived in the previous year and will be mated again shortly after. In the flurry of activity, pups can easily be crushed and killed.
Posted by LemurKat at 6:45 AM