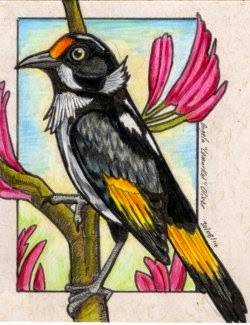 The Honeyeaters are a diverse Family of birds, spread throughout Australia, New Guinea and the islands of the South Pacific. Here they play an important role in polination, rather like the honeycreepers and sunbirds. This fellow is a New Holland Honeyeater and he was one of the first birds to be scientifically described in Australia. He is widespread across the southern coastal regions of the continent, with five distinct subspecies. Much of his food is obtained from nectar; he uses his beck to probe into the flower, then licks it up with his long tongue. He will also eat insects and spiders for protein.

These guys were pretty common around Sydney, where I nicknamed them the "scolding bird" because of the indignant call they made.
Posted by LemurKat at 9:56 AM