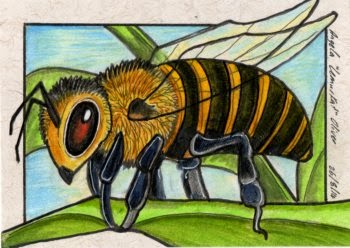 The Honeybee is a social insect with a cosmopolitan range. Hives are divided up into three types of bee. The most common is the worker bee - females that are not sexually developed - who play a role in foraging and collecting food and maintaining living conditions within the hive. The male bee is known as a drone, and he only remains with the hive during the spring and summer, during winter he is pushed out as the swarm go into survival mode. There is also one female bee that is sexually developed, known as the queen bee. She spends her entire life laying eggs and when she dies, a worker bee will be fed on "royal jelly" which will stimulate her maturity. The queen also produces chemicals that directly influence the behaviour of the other bees.

Bees play a very important role in pollination, as the workers fly from flower to flower, collecting nectar to carry back to their hive. It is of considerate concern that bee numbers are in the decline, possibly due to the widespread use of pesticides. It has been predicted that if the Honeybee  were to go extinct, then many of our crops would no longer become viable as a food source.

There is so much that can be said about the humble honeybee. She truly is a remarkable creature.
Posted by LemurKat at 8:49 PM