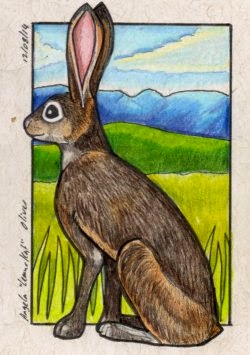 Hares are swift, long legged leporids, capable of dashes up to 56 km/hr. Unlike his rabbit relatives, he leads a mostly solitary existence. Most of the year he is relatively shy and nocturnal, but in breeding season, he becomes somewhat rowdy and active during the day. This may explain the idion, "Mad as a March hare." Does are receptive for only a few hours a day, and competition is fierce. Males chase one another in order to assert their dominance and boxing matches are common, as does attempt to fend off unwanted advances or to determine the fittest male. Youngsters are birthed in a shallow scrape known as a "form". These leverets are precocial - born fully furred with their eyes open.