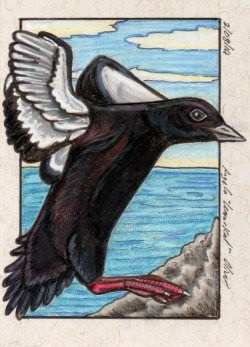 The Guillemot are members of the Auk family. This Black Guillemot is found on rocky cliffs and headlands around Iceland and the United Kingdom, as well as northern America. He dives into the water in pursuit of fish and crustaceans, favouring shallow inshore waters to the open ocean. His bright red legs and scarlet gape provide a striking contrast against his black plumage and play a role in his courtship displays. Outside of breeding season, his black plumage moults out, replaced with greyish-white, making him appear as if a different species.
Posted by LemurKat at 7:50 AM