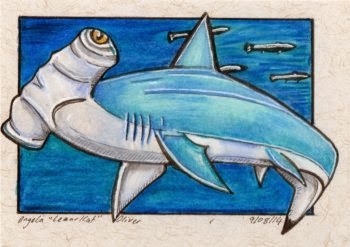 The Hammerhead is characterised by his oddly shaped head, which somewhat resembles a hammer. The purpose for this may be related to improved sensory functions, as it allows the shark 360 degrees of vision. It may also help him keep stable while making sharp turns, although his vertebrae is also specially developed to aid in this. During the day he gathers in schools, but in the evening he becomes a solitary hunter.  His mouth is very small, and he feeds mostly along the ocean bed, dining on squid, stingrays and other fish. He will use his head to pin the prey, before killing and eating it.