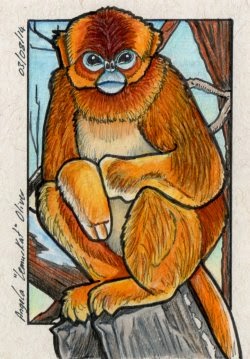 The Golden Snub-nose Monkey makes her home in the temperate forests of central and southwest China. She can withstand temperatures colder than most non-human primates. Her diet is primarily vegetative, with lichen being her favoured food. Since lichen commonly grows on dead trees, and dead trees are frequently logged, she is under heavy threat from deforestation. She will also eat leaves, buds, flowers and fruit. Golden Snub-nose Monkeys band together in troops. Females are more sociable than males, and will often assist one another with their infants. At night, they huddle together to share warmth.