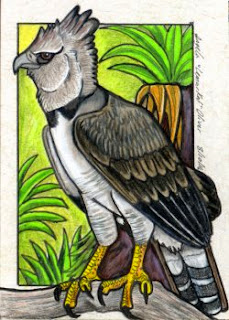 The mighy Harpy Eagle makes her home in the lowland rainforests of Central and South America. She is among the largest of eagle species, with some females weighing up to 10kg. Her wings are relatively short, allowing her greater manoeuvrability through the trees. She hunts the upper canopy, preying on monkeys and sloths. These she snatches up with her wicked talons - larger than those of any other extant eagle species - which are capable of exerting enormous pressure. Harpy Eagles are monogamous and form life-long partnerships, raising one chick every few years. Although she is found over a wide range, her habitat is fast disappearing and the species has become extirpated in some regions and is threatened in others.