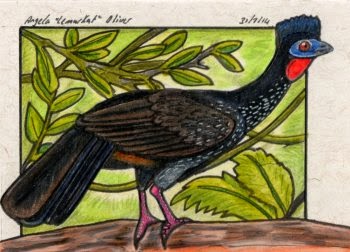 Like the chachalaca and currasow, the Guan are South American galliformes, of which there are a number of species spread over several Genera. This is a Crested Guan, and she is a social bird, living in pairs or a family flock. She strides along branches, dining on a variety of fruits and foliage. Her flight is a heavy flap-and-glide, often followed by a crash as she descends into the subcanopy. Her nest is a bulky construct of leaves and twigs, built high in the canopy. Both parents help to raise the brood.