Not a vast amount of writing today, with good reason - today I got to meet my cast!

In Christchurch, it was a lovely, clear - if not exactly sunny, day so we decided to head up into Arthur's Pass to see the area where my story is set. I did not have my sights set too high on seeing kea - sometime you do, sometimes you don't - the last few times we had, but I figured this time we might not.

After crossing over the Bealey River we stopped at Klondyke corner, and there we saw a silver car parked, a large olive green bird perched upon the back. We parked alongside and he regarded us quizzically before continuing to hop around the car.  He was inquisitive rather than destructive - if he had started tugging at stuff, I WOULD have chased him away - not videoed him! Well, only a little bit, maybe ^^ 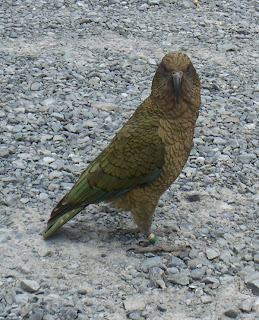 With my awesome kea identification skills, I can tell you that he was a young male, probably 3 or so years old. He was also banded - but I forgot to note down the colours as I was being eaten alive by sandflies at the time. We then had to drive around him to get out, and sit and wait until he had walked out of the way, because there is no way at all I wished to be responsible for the death of a male kea almost at breeding age!

The weather report that declared it would be quite warm and not wet (5% precipitation) in Arthur's Pass turned out to be 100% inaccurate, as the clouds were heavy with moisture that turned to a steady drizzle by mid afternoon, alas ruining my plans to run away and photograph various cottages and things that I might like to use in my story. I guess that shall have to be done via street view - or a return visit this friday (I am seriously contemplating heading up there and staying the night).

But here are some of the places mentioned in the story:
This is the Visitor's Centre. In the carpark were three kea, at least two of which were young males. One had two white bands saying "G" and "O", I think. He did sit on a red car and have a vague attempt at pulling off the car aerial, while one person sat inside the car and another photographed him (I am not sure if the latter was the car's driver, but suspect it was so). Across the road a group of tourists were removing the rubber from their window wipers, presumerably to prevent the keas doing it for them. One walked across the road (luckily, no cars about) to see what they were up to, then proceeded to fly up and roost on a campervan. 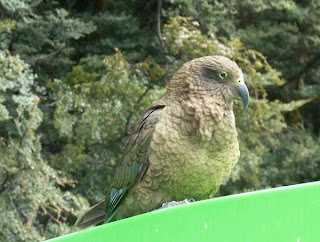 This is another young male - but this one is probably only a year old. See how more pronounced the yellow ring around his eye and cere are? Indeed, he could well be Pakari! The "King of the Visitor's Centre" in my novel.

Further along, we come to the cafe, which also features prominently:
If you enlarge this image, you will see there is a kea on the peak of the roof.

Noone was eating outside - it was too cold for that, but three keas were hanging around. As we were walking over to have lunch, we heard the rather distinctive sound of a cup breaking. Yes, some foolish person had left their coffee cup out on the table - and the kea had pushed it off. 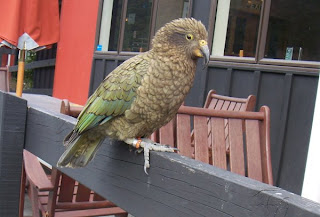 This young fellow was banded "R" and "R" with the same white bands - flimsy looking but very easy to read from afar - so I reckon someone must be up there studying them. He's got a sort of look in his eye and I reckon that he's a deadringer for Raweke, my mischevious fellow with a pechant for human clothing.

And this guy wasn't banded at all, but when I came close to him, he just stared at me, like he knew something I didn't. I hereby dub him Tiriki, the "hero" of my novel. 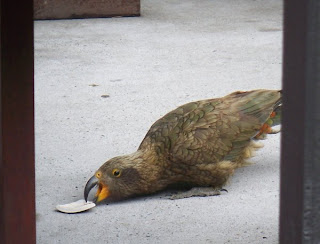 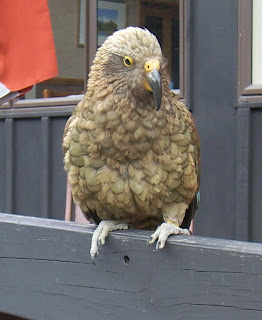 There was a third as well, but he remained off in the background - classic Totoa behaviour - he's the staunch one.

The only one of my gang I didn't find was Hiwa - but female kea (they have a shorter bill, that's how you can tell) are much shyer than males, so she was probably off somewhere eating quietly.

We then drove over the highpoint of the pass and ventured up Otira valley - heading for the overbridge. Alas, as we crossed over from east into west, the weather turned distinctly West Coast. We braved the valley anyway - making sure our car was locked and valuables on our person (someone I know had their car broken into up there, and NOT by keas). And picked our way up the valley.

Which is beautiful. The colours are an extraordinary array. 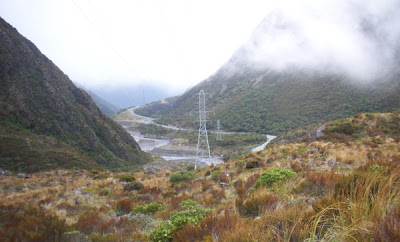 Looks like an amazing day out, even if the weather wasn't so good. Those birds are beautiful.