There is a science known as Cryptozoology - the study of creatures that do not - or perhaps SHOULD not exist. It is a branch of science that I am most sceptical about but one cannot argue that there are still large tracts of the world where things have never been discovered and that maybe somewhere out there are creatures unknown to science or believed to be extinct. That is not what these pictures depict. I have sought out the more outlandish, the more bizarre of the Cryptids for the "Unknown Creatures" swap. Then I drew them based on written descriptions.

The Sigbin of the Philippines (cousin to the chucapbra, perhaps?)
"...It resembles a hornless goat, emits a very nauseating smell and possess a pair of very large ears which are capable of clapping like a pair of hands and a very long flexible tail that can be used as a whio..." 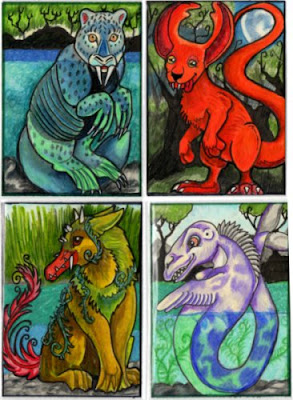 Also the good ol' Bunyip of Australia -
"...Common features in Aboriginal descriptions include a dog-like face, dark fur, a horse-like tail, flippers and walrus-like tusks or horns or a duck like bill..."

And Caddy (Cadborosaurus Willsi) of British Columbia -
"...as some sort of a mammal, long, slender, and with a bifurcated tail. ... the head of the creature is described as a camels or a horses..."

Also, a couple of pieces for my Reading Group (complete with my reviews)

Tanglewreck by Jeanette Winterson
"Tanglewreck" is a bit of a trainwreck of a book. The plot tries very hard to be clever, with name dropping and insertation of scientific theories. This makes the plot rather confuluted and the science highly flawed. It tries to be sensible and scientific, throwing in a bit of magic and then having the "speed of love" rescue someone from a black hole. Some moments are downright creepy, others merely random and weird. It feels to me like the author has just shoved a random bunch of ideas together and tried to come up with a fairly lame plot to connect them. Not particularly recommended.

Picture depicts Elvis the Robo-dog not quite sure what to make of Bigamist, the psycho bunny spy: 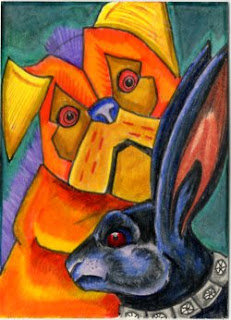 Linnets and Valerians by Elizabeth Goudge (also known as The Runaways)
Enchanting, delightful, charming and quaint are all words to accurately describe this beautifully written, engrossing classic. The characters are delightfully eccentric, the children charmingly naughty and Uncle Ambrose gruff but loveable. From his one-legged manservant to the reclusive old lady next door, the mysterious artistic hermit and the wicked woman with her equally wicked cat, all of the characters are beautifully described and affectionately developed. The language is lyrical and evocative - you can smell the english country air and the delicious home baking will have you drooling into your book. Overall, exquisite and magical.
Picture depicts Abednego the monkey "manservant" with Gertrude, the lovely doll he is given by the youngest girl. Behind, a trio of bees cluster on the window. Bees played a relatively important role in the tale. 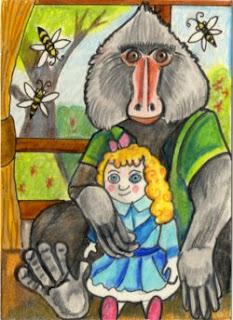