"Don't you dare call me pretty!"

One of AC Warrilow's "rainbow crested" lorikeets from his book, "The Familiar's Tale". 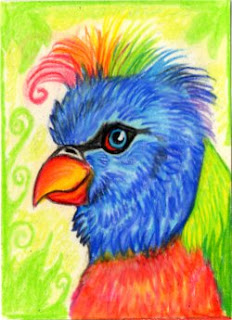 Apparently, I was the first person to point out that they're called "rainbow lorikeets" and thus these two characters got a bit of a mohawk-makeover. It rather suits him, don't you think?

I also drew a Californian Quail before work this morning. It strikes me as a tad ironic that my most popular art cards seem to be the ones that are the quickest to draw. This wee chap took me about 20 mins. I'm hoping he'll be popular! 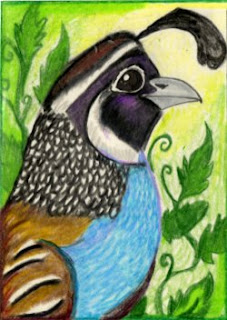 He's flying into the home of Carole Cadek.

And lastly, for an 8-year boy that likes dinosaurs and birds, well, I hope he likes this wwee fellow: 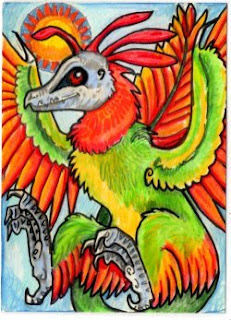 It's my "Dragon" character Pippit, in his revised, feathered dinosaur form.

Not bad for a tuesday night when I'm suffering a mild headache!