Once more with feeling, err shading

After an honest and a little embarrasing critique of my proudly displayed "tyto alba artistic evolution" piece yesterday, I am humbled and a little shameful. Yes, I was lazy and refrained from shading it (not that she accused me of laziness, being too tactful for that). I have no real excuse (given the other changes I had made to the original piece), except that I was eager to get it uploaded and found it cute, so when I decided it needed a bit of blue shading I threw it on with little thought and any consistency. This is not, I admit, a very good way to learn and improve your art!

So I have reworked it again, but only a little this time - taking into consideration the backlighting
from the moon. 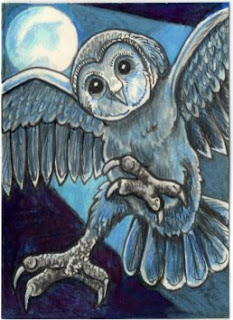 I am still not particularly good at imagining the play of light on fur, feathers or fabric and thus my shading is still most likely off. then again, a backlit subject like this would be almost entirely just a dark shadow with highlights on the head and along the tops of the wings, so I feel a few liberties must be taken.

She also implied it was rather too cuddly - and I agree, Barn Owls should be mysterious and a little creepy. However, I'm guilty as charged - I've become stuck in the saccharine children's book style.

So my challenge to myself today is to draw something dark and creepy and only a little bit cute. I am tempted to redraw this relatively archaic piece:

Also in the "Bluemoon" set, it is one of my early efforts at drawing an aye-aye, and rather a poor one.
Posted by LemurKat at 9:43 AM