In the Jungle, the Mighty Jungle...

Three cards for the Jungle swap on ATCsfor all:

Spix Macaw - one of only three blue macaw species, the Spix is extinct in the wild and has the rather unfortunate distinction as being one of the world's rarest parrots (I'm not sure whether it is rarer than the Kakapo or not).

Golden Lion Tamarin - one of the world's rarest primates. These wee fellows are found in Brazil where they are highly threatened by logging.

Also, drawing inspiration* from "mothstorm" by Philip Reeve, we have a steampunk submarine: 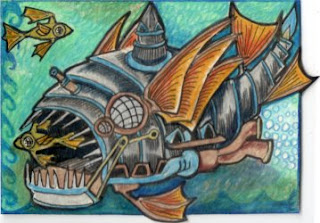 *That is to say, copied from one of Wyatt's pictures with a few of my own touches added. Sorry Wyatt, but my imagination is not grand enough to incorporate Steam Punk.

Also drew the robotic dog, Elvis and the psycho-bunny, Bigamist from the book "Tanglewreck" but haven't scanned it yet.
Posted by LemurKat at 8:20 PM