An Introduction to the Writings of Angela "LemurKat" Oliver

If you have come here from the Sir Julius Vogel Awards site, and want a taste of Angela's writing: the first chapter of her Epic Lemur Saga can be read here: on DeviantArt

Angela "LemurKat" Oliver began writing for the internet back at the turn of the century, mainly dabbling in Fanfiction (which you can still read today over on fanfiction.net) with the occasion commission thrown in for good measure. After a time, however, she grew weary of playing in other people's worlds and started to realise and develop her own. Her first book, Aroha's Grand Adventure, was released in 2011, with A Midsummer Knight's Quest following a few months later. 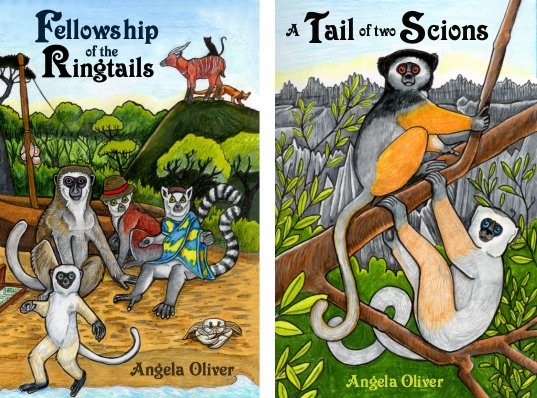 Her latest, and well received, novel is the first in the Lemurs Saga - an epic fantasy adventure set in an alternate world Madagascar where the sentient/dominant "people" are lemurs. Whilst this may lend it some resemblance to "furry fiction", it is far less niche and is, essentially, a darker and more "grown-up" Redwall. The culture of the lemur kin - of which there are nearly 100 species - is a blend of real-world Malagasy culture, genuine lemur behavioural ecology and a healthy dose of author creativity. Although she has only visited Madagascar once, the country found its way into LemurKat's soul. She is very passionate about lemurs, and it is her hope that the passion will colour her world and capture the hearts and imaginations of her readers.

The first in the series is Fellowship of the Ringtails and it follows the birth of blue-eyed Aurelia, a silky simpona born far from her natural home. Orphaned soon after birth, she is trusted into the care of Fiantrana, a ringtailed lemur (maky) mourning the death of her own kit, and raised amongst the Vezo (fishing) tribe. Alas, the blue eyes are a mark of Aurelia's birthright - she is the illegitimate heir to the throne - and the Queen cannot permit her to live. So starts a race for her life, as Aurelia and her friends seek sanctuary to the north, facing trials and tribulations at every turn, with the sadistic Hunter Noir on their tail.

Whilst technically aimed at an adult market, it would be suitable for older children as well, although it does contain a few minor curse words (bitch/bastard) and a bit of gore. Those who have enjoyed the Redwall series (Brian Jacques), the Deptford trilogies (Robin Jarvis) and Watership Down (Richard Adams), will enjoy it.

The follow-up, Tail of Two Scions, is well underway, with a tentative release date of late 2014. It continues Aurelia's story, whilst also allowing insight into the life of her rival scion, Rakoto, the true son of the current Queen, he is not - genetically - of the royal line. An introspective youngster, plagued with self-doubt and confusion at his social status, things take a dramatic, and dark, dive for him when he becomes apprenticed to the vicious alpha Hunter. Can he withstand the darkness growing inside himself?

Also an artist, LemurKat designs her own covers and the physical format copies of her books are ridled with illustrations or lineart, with educational appendices for the reader that wants to know more.

All three of her current titles are available via Amazon: Angela Oliver's Author Page in both ebook and physical format.

A summary of her other titles:

Aroha's Grand Adventure
Follow the adventures of Aroha, a weka*, chick-napped by a small boy and translocated across the country, wherein she makes her escape and begins the long walk home. Her tale is an epic adventure - meeting with quirky characters and facing a great many threats: from malicious magpies to fiendish felines, and even the onslaught of the earth itself.
This is a fun, fast paced animal-protagonist novel, with a cheeky (and somewhat greedy) protagonist who really is a "stickybeak". It is aimed at children, but has achieved appreciation from grown-ups too.


* Native New Zealand woodhen - a flightless brown bird about the size of a chicken, noteable for its curious personality and tendency to steal things, like food and shiny objects.

A Midsummer Knight's Quest
There are technically two tales weaving together in this rather chunky contemporary fantasy. The first is a story of friendship: as Hemlock the goblin abandons his regimented and risky life as a Scavenger goblin in favour of the companionship of a brownie and a bird. In the second part, the two of them band together to face off against an evil developer, who seeks to reduce their "kingdom" to ruins.
There are plans to release this in two parts at a future date.

LemurKat's writing style is as colourful and quirky as her art - with a cast of interesting characters (but barely any humans). She draws inspiration from Laini Taylor (possibly her favouritest writer ever), Paul Kidd (who writes epic Furry fantasy), Piers Anthony (how NOT to write) and enjoys reading the works of other independently published authors. As a founding member of a local group of authors, the Christchurch Writers' Guild, she also enjoys reading and reviewing manuscripts and often finds herself automatically critiquing plots as she goes. Her books are self-edited, with input from other members of the Guild, for which she is currently editing an anthology of short stories, scheduled for release in early-to-mid June.

When she is not writing, LemurKat is generally reading or working on her many art projects. As you will notice if you are following this blog, she is currently drawing and uploading an animal-a-day, working systematically but selectively through the alphabet. This epic project is predicted to take about three years to complete. She is currently up to day #112 and still on the Co's. Each letter is being released as an art book, and a card game, app and/or compendium will follow.

Since you've found this blog - if you wish to know more, click on the links above to explore her website: http://lemurkat.co.nz

The Animal-a-Day project can also be followed on Tumblr: http://lemurkat.tumblr.com 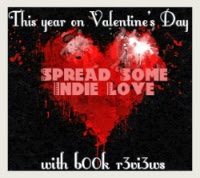 Hopping through for some Indie Love! Her covers are adorable!

Thank you Kristen! I shall need to do some hopping soon ^^ Now I see there's a lot more on the list!