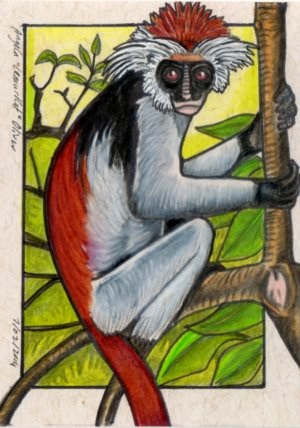 There are a number of species of Colobus Monkey divided into two Genus. The black and white are the most well known, but the Red (Piliocolobus) species are the most colourful, as well as being the most endangered: with three of the nine species classified as "critically endangered". These "Old World" monkeys live in troops, which can have up to 80 members, with twice as many females as males and a strong social hierarchy. Adolescent monkeys often leave their natal troop to join other groups, but other groups can be suspcious and violent, thus the "teenagers" will occasionally join up with a neighbouring green monkey troop and "spy" on the group they wish to join. Aside from the usual threats of deforestation and being hunted for bush-meat, Red Colobus are also predated by chimpanzees. Studies have shown that chimpanzees are responsible for 6-12% of female/infant deaths in some areas.
Posted by LemurKat at 6:22 AM