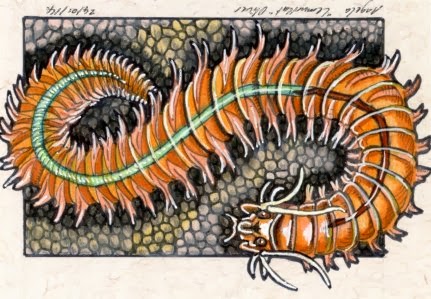 The Clam Worm is a marine annelid found throughout the North West Atlantic, the gulf of Maine and South Africa, at depths of . They spend much of their time scavenging the shallow sea bed for worms and algae, where they also play an important role in the diet of fish and crustaceans.  To protect themselves, they form a sheath of hardened mucus about their body. During lunar phases in the spring and summer, the Clam Worm may undergo a process called epigamy. Here they transforms into a morph capable of reproduction, with the internal digestive organs atrophing and the development of swimming appendages. Their main purpose now is to release eggs or sperm, and after that, they die.
Posted by LemurKat at 8:48 AM