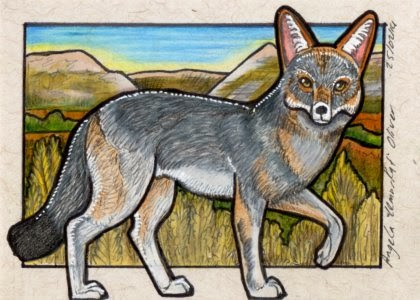 The Coyote is widespread across America, ranging from Panama in the south to Alaska in the north. He is a generalist and a survivor. Packs usually consist of small family groups - six or so individuals - with a les rigid hierarchy than wolves. Considered the wolf's "little brother" he flourishes in areas in which wolves have been eliminated. He has also been known to hybridise with domestic dogs, wolves and the critically endangered red wolf. Coyote pairs form monogamous relationships that may last several years and may adopt, or steal, pups from other pairings if the situation requires it. His diet is partly carnivorous, somewhat omnivorous and definitely opportunist. Where the urban environment encroaches on his habitat, he may roam the streets hunting cats and small dogs, or dig through garbage. Although he prefers smaller prey, he may hunt co-operatively to take down a deer, especially in winter.
Posted by LemurKat at 7:58 AM