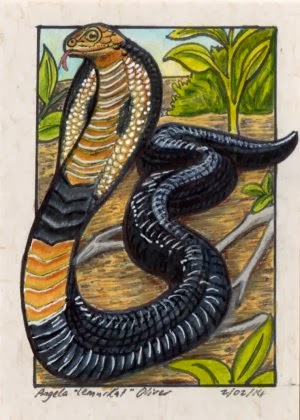 The Spectacled Cobra is responsible for causing the most snake bite injuries (including deaths) within her range of the Indian subcontinent.  Her venom is neurotoxic and paralyses the body, which can result in respiratory failure and cardiac arrest. When threatened, she raises the front of her body and flattens her neck into the characteristic cobra "hood". This hood has a pattern of spots on the back that resemble eyes and give her the "spectacled" moniker. She was popular with snake-charmers, as the swaying motion she makes when roused can appear a little like hypnotic dancing. She is, in fact, deaf to the music but follows the movement of the pipe and reacts to the tapping of the Charmer's feet.
Posted by LemurKat at 6:18 AM