No, not that kind of Coquette. This kind: 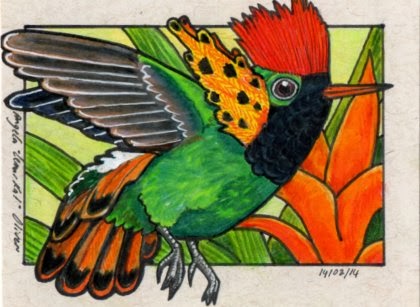 There are ten species of Coquette - a Genus of hummingbirds found in Central and South America. The largest species measures no more than 9cm, but many are considerably smaller. The Tufted Coquette measures only 6.5cm, making this  illustration larger than life. The males are gaudy with their plumes and flamboyant scarves, whilst the females are more demure in colouration. These plumes are used in territorial and courtship displays, as hummingbirds in general are very aggressive for their size. They need to be. A bird so tiny, with such a fast metabolism, requires a constant supply of rich, high energy food. This mostly takes the form of nectar, which the bird sups while hovering and fanning his wings at up to 13 times a second.