Today was a slightly less productive working day. I got up early, did my usual early morning routine (shower, emails, forums, breakfast) then decided to bake a batch of muffins and wash the dishes. Why? Because I was meeting some friends for a picnic in the park and then we were going to check out the new central city shopping district. Anyhow, got out around 1000 words, then got restless, packed up the (now cooled) muffins and wandered into town early. The new shopping village is really cute - it's composed of shipping crates - and they are all brightly coloured. One lady commented that it looked like it was "made of lego": 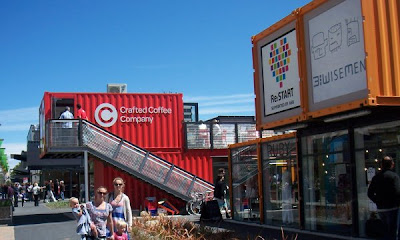 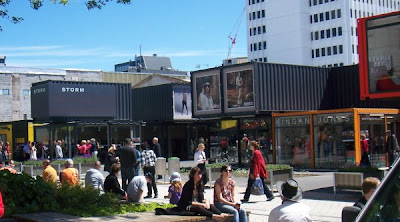 Anyhow, after that I made my way to the meeting point and sat int eh sun reading for about half an hour before it became apparent that nobody was coming to my picnic :( But as one lass had been texting me to say she was running late, I decided to walk to her place instead.

Where we sat and talked for about 2 hours before walking back into town to have dinner at the best vegetarian restaurant in Christchurch - the Lotus Heart. We then parted ways - them to go watch things blow up and make pretty lights, me to come home and have an "early night" because I am back at work tomorrow.

Anyhow, to keep it short - in today's writing, Aurelia has been chosen to go on a patrol to meet up with a group of refugees that have just set up camp in the Stone Forest. In her party are her tree-mate, Astrid; a sensible blue-eyed black lemur; a hyperactive brown lemur; a Lake Aloatra Gentle Lemur and a Coquerel's sifaka who has proven to be not the nicest of lemurs to meet. She's a bit of a bully, to be frank.

Anyhow, no quote cos you've got pretty pictures instead and I need to go to bed.
Posted by LemurKat at 11:19 PM