Noir the shadow in the night 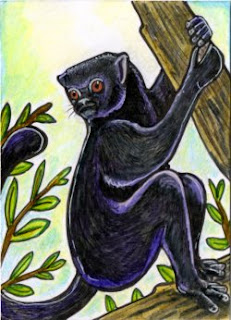 Every novel worth its salt requires a villain and in this one, it is Noir. Noir is the head of the Queen's Pack of Hunters. This is a most exalted position for a male to achieve, as in lemur society in general, females outrank males. Noir has enjoyed several years in service to the Queen, and she favours him.

Noir is a Perrier's Sifaka, or Radjaka. These critically endangered lemurs live only in an isolated pocket of rainforest in Northern Madagascar, but Noir travels rather a lot. His fur is pitch black, as is his naked facial mask and hands.

Noir rides a bongo buck, generally described as a "red antelope" in the story. Antelope are not native to Madagascar and in my fictional equivalent they were an early import, brought in to provide the lemur-kin with milk and transport, to replace the zebu and goats found in the real-world Madagascar. His other companion is a fossa, named Kaikitra (translates as "bite"). She is obedient only to him, and like all fossa has a taste for lemur flesh. Occasionally Noir lets her indulge. Mostly she acts as a threat or deterrent, and is rather useful at helping him get the information he requires from his subjects.

In personality, Noir is cold and cruel. He is faithful only to his queen, whom he loves in his own slightly warped way. He likes to kill, but is quite practical about such things and does not cause ultimate chaos in his wake, curbing his blood-lust until it is less likely to cause hassles. As the leader of the Hunter Pack, he must constantly demonstrate his dominance over the females and demands respect.

So far he has been the hardest character to draw.