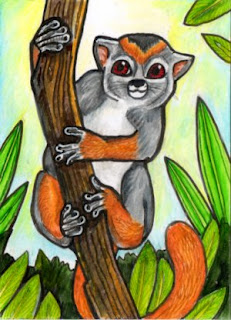 Sneak wasn't meant to be a main character in my novel. He was introduced at one point because I wanted Aurelia to have some playmates her own age. Once he had befriended her, he wanted to stick with her for a while and insisted I let him come along on her journey.

He's a young crowned lemur (Eulemur coronatus) which are known in the story as "varika" (the Malagasy name for several lemur species, just to be confusing). He is boistrous and speaks his mind, sometimes coming across as a wee bit blunt. He's also been known to stretch the truth, exaggerate or outright lie. But underneath it all, he's a solid and loyal friend, willing to defend those he cares about. His family is a large and extended tribe, and his older brother is a piroquer called Hery, who plays a minor role in the plot.

Sneak's name is not his "real" name - eulemurs (that is to say, the so called "true" lemur species) do not name their kits until they reach 5 months of age, because infant mortality is so high. Consequently, everyone nicknames him "Sneak" because of his tendency to creep around places he shouldn't, to overhear conversations he shouldn't and to otherwise learn a lot of stuff that he's really not supposed to know. He also has very nimble fingers, and is good with knots - possibly something he has learnt from his older brother Hery.

When he receives his real name, it will probably be Misokosoko.

Sneak and his family live in the mangrove village called Belo-sur-Tsiribhana - which is named after a real village in Madagascar, although looks rather different. Constructed at the mouth of the river, the Belo-sur-Tsiribhana of my story is built in the mangrove trees, which are connected by rope ladders and platforms to form habitations. The lemurs travel around the trees by leaping or swinging, and also use boats (piroques) to travel around the waterways, transporting foods and goods. It is unclear what their principal produce is, but they do a lot of fishing. The village is one of mixed species - primarily varika (brown lemurs and crowned lemurs), komba (mongoose lemur) and tsibahaka (crowned sifaka and deckens sifaka). They are ruled by a council, represented by one member (usually female) of each of the prevalent species. Sneak is the son of the crowned varika Counciller.

In appearance, Sneak resembles a typical young male crowned lemur. His fur is a silvery grey for most of his body, but his arms and legs are furred lightly in orange from elbow/knee to fingers/toes. His tail also is orange. His belly is pale grey/white. Across his forehead is his "crown" which forms a V above his eyes, also orange in colour. The top of his head is black. His eyes are orange-red. His hands are furred in orange, but his fingers/toes are grey and his nails are black. He has no visible scars (yet). As he grows, this orange will spread to replace the silver fur.

Here is an extract when he introduces Aurelia (who he is calling "Fotsy" because that's the name she's given him) to his family:

“Salama,” Sneak greeted the plump varika. “This is Fotsy, she's a friend from far, far away. She's come to learn a bit about us varika. Fotsy, this is Mpahandro – she's my great aunt and our tribe matron.” He grinned, licking his lips, “she also makes a fantastic banana and rice custard. You have gotta try some. It's like the bestest, most delicious thing ever.”

“Oh you little flatterer,” Mpahandro nuzzled him with teasing affection. “How did you know I was just rustling some up for dinner?”

“I can smell it from fifty trees away,” Sneak laughed. “When do we eat?”

“Only after everyone has eaten,” she chuckled. “And you should show some manners in front of your fine sifaka friend. You don't want her to think you're an uncouth barbarian, do you?”

“Oh,” said Sneak, “I'm sorry.” He turned to Aurelia. “Fotsy, would you like to help me lick clean the pot?”

Stay tuned because I am working on a number of character illustrations at the moment and I will introduce you to all the characters - Karazana, Mijifajifa. Rakoto and of course Aurelia. As well as Noir, Matthieu, Chike, Mephistopheles, Maohy and maybe Daniel, if I ever find a way to work him into the story.