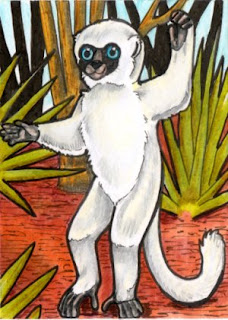 Aurelia is a Silky Sifaka, referred to in my story as a "silky simpony" as that is another Malagasy name that is more specific to her species (although it also includes diademned,Tattersalls and milne-edwards species).

This is not typical Silky habitat. Silkys are a rainforest lemur found only in Marojejy and are critically endangered. In our world, that is. In Aurelia's world, their tribes live in the north but occasional individuals leave to try and make a name for themselves in the city - in this case, Narivo (in the central highlands). Aurelia's mother, Solange, made such a journey. However, she was forced to flee from the city, heavily pregnant, and ended up birthing the kit far to the west, near the spiny forest. She died shortly afterwards, and Aurelia was raised by ringtailed lemurs (maky), specifically a young female called Karazana and Karazana's mother, Reniko. We will meet Karazana tomorrow.

Aurelia is spirited and stubborn. She is always asking questions and wanting to know more about what is going on around her. She likes an audience, and although she was teased somewhat in her younger days, has a charisma that draws others to her. She also loves to spin a yarn, and make up elaborate stories.

Her fur is pure white, with highlights of gold around the shoulders and spine (not visible here), which show a little of her father's heritage. The other legacy from her father is her bright blue eyes. The only non-human primate to have blue eyes in our world is a particular species of black lemur found in northern Madagascar. However, as my novel is not set in our world, the blue eyes have a different significance. Her fingers and toes are black, as is her face, although as she grows older, her face will lighten to pink.

Sifaka are the more elite, the upper-crust of lemur society and they practise manners and etiquette and fine speech. However, since Aurelia was raised in a maky fishing village, she has no such manners. She's also got a quick-temper and will nip or cuff if forced into a situation.

When I first set out to write this novel, Karazana was scheduled to be the main character and Aurelia was supposed to spend the first half as a fairly helpless infant. However, Aurelia quickly took over, forcing Kara into the background and essentially taking over. I'm letting her have her way now - I sense she knows better how her story will go then I had.

As she is the main character, there are plenty of extracts for Aurelia already in my blog, but here's a few of my favourites:
Aurelia meets her mother
Aurelia explains her heritage