And now we have Fiantrana 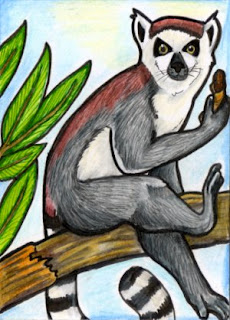 Rana was supposed to be the main character of the novel. In fact, initially she was called "Katta" to reflect my online nickname, Kat. However, when I started naming the other lemurs using Malagasy words, I thought I should do the same for her. So I gave her the name Karazana, which translates as "kind". Except I didn't realise at first that it was a noun, and meant "species". So after some research I changed it to Fiantrana, which means "compassion".

Fiantrana is kind. She is about three years old and at the start of the book has just lost her first-born kit. The unnamed male kit was deformed. As she is a nursing female, she plays nursemaid to her mother's latest kits - twins. When she is called by the Ombiasy and given the white sifaka kit to look after, she is at first a bit reluctant. This strange, alien youngster holds no real attraction to her. But, her generous nature wins out and she winds up raising the kit as her own. As Aurelia's personality becomes more apparent, Fiantrana warms to her, and eventually feels for her as a real mother would - protective and loving.

Fiantrana is a typical ringtail lemur, or maky. She is of medium size and lean of build. Her tail is long and striped. Her face is white, save for the black patches around her eyes and muzzle. A black band runs across her forehead, and above this her head is reddish-brown, a colour that runs down her spine, spreads out along her shoulders and eventually concludes at her tail. Her body fur is silver-grey, except for her belly which is a pale creamy-grey. Her hands and feet are black. She has no visible scars yet, but by the end of the story I expect she shall bear some.

Maky do not form longterm partnerships, but live instead in large family groups. They are only "in season" for one day of the year (different days for each member of the troop). During that time there is much competition between the males for the females. Thus the father of Fiantrana's kit is not of particular import.

Fiantrana is kind and gentle, but she is also willing to step in and discipline an unruly kit if the need arises. She is not spontaneous, and prefers to think things through before jumping into decisions.

Here's an extract (Fiantrana has just walked into a fight between Aurelia and another young lemur called Mafana):

“What is going on here?” Fiantrana asked.

“Your little parasite stole my zaza,” Mafana said. “And she's been stealing stuff from all the other maky too. She's been hiding it in the woods.”

“Is this true?” Fiantrana turned her golden eyes to Aurelia. The sifaka had scrambled to her feet and now crouched low. Sand clung to her pelt. She could not meet her foster mother's gaze.

Fiantrana just sighed and her shoulders slumped. Her look of disappointment made Aurelia feel more sorry than Mafana's bullying ever could. “I am most disappointed in you,” she said. “You must return everything immediately, and apologise. Starting with this kit here.”

With Fiantrana watching, Aurelia had no choice but to hand the doll back. “I'm sorry,” she muttered as Mafana snatched it from her hands.

“You will be,” Mafana replied, grinning wickedly and flashing her fangs.

Then Fiantrana cuffed her. “Learn some respect, Mafana,” she snapped. “You've recently received your true name. It's time you stopped acting like a weanling.”