A first glimpse of Rakoto 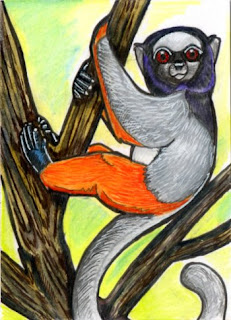 Rakoto is yet to fully establish himself in the plot, but he is cast in a major role for Act 2. Indeed, if the story goes as planned (ie: Aurelia deigns to take a back seat), he will be the Focus Character of the second part, which I shall write for NaNoWriMo this year.

Rakoto's mother is Queen Ramavalona, the Lemur Queen of Madagasika. He was born some time after the King's untimely death and was something of a disappointment to his mother. She was hoping for a girl, you see, to inherit the throne after her.

I shall now get Celeste and Matthieu to give you a little education on Lemur politics:

"... Sifaka royalty is passed down from female to female, understand? The Queens rule,” explained Matthieu.

Aurelia nodded. “It's the same in maky society, the females are the bosses.”

“Okay, maybe they are not so primitive,” Celeste smirked at her brother.

“But not all of the Queens have the time or inclination to produce their own heirs,” he continued. “So this task falls to their brothers. The Queen choses a mate for her older brother – one of fine breeding and good health, and it is their duty to produce a daughter to inherit the crown.

“However, in this situation, Queen Ramavo died early, before her only brother, Radama, had the chance to produce an heir. So, by default, the crown passed to his mate – Ranavalona. It was supposed to be temporary, until they fathered a daughter. But before that opportunity arose, the Queen's brother died.”

“Under rather suspicious circumstances,” Celeste interjected...

So as you can see, when the kit proved to be a male, Ranavalona was rather disappointed. So disappointed that she had her advisor, Mephistopheles (we'll meet him later) take the kit away and foster him on another nursing female, a Tattersall's sifaka called Araminta. However, Aramainta already had a kit of her own - older and bolder than the fosterling and had no real attachment for Rakoto. Although she supplied all his needs - food, warmth and grooming, the poor kit grew up with no affection and being bullied occasionally by her real kit.

As he grew older, his mother showed more of an interest in him. Here Mephistopheles stepped in too, teaching him social etiquette, politics and furthering his education in the manner that ruling class Sifaka need to know. Mephistopheles grew rather fond of the kit and Rakoto learned to love him as a father*.

Rakoto is a Diademned Sifaka with some distinctly different colour patternings. His black "hood" and white forehead are atypical of his species, but are a colour variant found in real world Diademned Sifaka. For the record, neither his mother nor the late king had this colouration. Anyhow, Rakoto's head is black, with the colour continuing in a stripe down his spine and terminating at the base of his tail. His body fur is mostly silver-grey, with orange fur on his lower arms and his legs. His tail is silver. His belly is creamy-white. He has orange-red eyes, like his mother.

As he has yet to play a role in the plot, his personality is not yet fully understood. However, I intend for him to be shy and quiet, preferring his own company or the company of books. He does not relate well to kits his own age, but has formed a strong friendship with his mother's advisor. Other than that, he has a somewhat sulky nature and avoids conflict where possible. He is a thinker, not a fighter.

* When I say "as a father" I don't mean as his real father. Although Rakoto's paternity is rather in doubt, there is no way the Queen's Advisor is his father. Honest. It's not genetically possible.
Posted by LemurKat at 11:09 PM