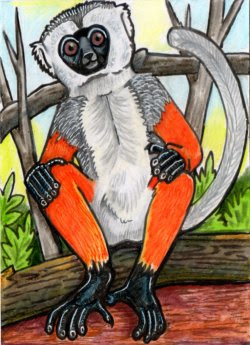 Lemurian royaltie is complicated. The throne is matriachal, but passed down from Queen to niece. Matthieu explains it here in this post about Rakoto. Also, the royal line is indicated by the presence of blue eyes. As you will see from looking at this lovely image of Ranavalona, the current queen, her eyes are not blue. They are red, like all diademed sifaka. From this you might assume that Ranavalona is not the niece of the previous queen. And you would be right. Ranavalona was chosen by the previous queen, Ramavo, as a suitable mate for her brother, Radama. Ramavo alas, died soon after and less than a year later, her brother also died. Leaving no heir. Therefore, Ranavalona inherited the throne more or less by default and is considered by some to be an usurper.

The fact that her son, Rakoto was born rather more than 180 days* later, is the cause of some of this conflict. Nor does he have the requisite blue eyes and aside from all that, he's male. Therefore, there is no heir - legitimite or otherwise, to inherity.

Even when a mated pair, Radama and Ranavalona were less than happy. Ranavalona had her eyes only for the throne, and Radama had his only for the beautiful silky simpony, Solange. He resented his sister for choosing someone else to be his mate. In an effort to beat Ranavalona in providing an heir, Solange begged a medicine from Mephistopheles, a herbal concoction that would make her ripe for mating in the wrong season. It worked. When Ranavalona realised that the silky was pregnant, she was furious and made various attempts to poison the unborn kit and its mother. During this time, Radama accidentally took some of the poison and died. Solange fled, fearing for her life. Ranavalona took command of the Hunters and sent them after Solange, who was killed near the Vezo-maky village of Madiorana. Before she died, however, she gave birth to a daughter, Aurelia, who exhibited the royal blue eyes.

Ranavalona is not evil. She is determined and dedicated to her country. She has strong views - and some strong prejudices, that are, however, detrimental to those of her subjects that do not agree with her. She is not afraid to eliminate any perceived threats by violent means where necessary. She is also well aware that Aurelia is necessary to her position. Initially she wanted the kit dead - so that her own daughter would inherit. But when her kit was born not a daughter, but a son, Ranavalona struck trouble. Sons cannot inherit. Now she needs Aurelia alive so that she can manipulate her. I suspect Aurelia will not take well to the manipulation.

Ranavalona also has a dislike of foreigners. Although there used to be regular trade between the monkeys of the mainland and the lemurs of the island**, this link has all but been severed. After she took the throne she announced that the few monkeys left - which are teachers and seekers of wisdom, must depart the island forever or they will be put to death. Most left. The Queen's Hunters are currently seeking the few that stayed and killing them. She believes that their ways are corrupting the traditions of her lemurs. Also, she does not want the four-foured lemurs - the Eulemur species, to learn. Some sifaka, especially those living in Narivo, can read and write, but Ranavalona fears that if the "lesser born" Eulemurs learnt, then it would lead to social unrest.

The royal bloodline are the only sifaka's that do not have French names, and the name "Ranavalona" was not her birth name, but one given to her when she became Radama's official mate.

She is a diademed sifaka of striking colouration. The black "V" crown on her head is distinctive and surrounded by a fur "cap" that is more silver than grey. This cap extends down her head and to her shoulders, and down her spine getting paler until it fades to white halfway down her back. Her facial mask is black, but the mane of fur around it, pure white. She has a white "collar" under her chin and a creamy-white belly. Her arms and legs are furred in golden-orange and her hands are black. She has red eyes.

Diademed sifaka are probably the most striking of the lemur species, and it is why I chose them for the royal bloodlines. Ranavalona is based on the real Ranavalona, the butcher queen of Madagascar. It you think Lemurian politics are complicated, trying researching Malagasy ones...