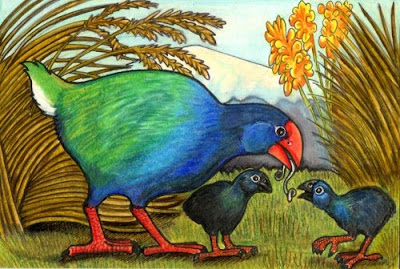 The Takahe is another of our unique birds in Aotearoa. It is a member of the rail family - making it cousin to the common Pukeko, but is much bulkier and flightless. Takahe used to roam the tussocklands of New Zealand, happily munching all day on tussock grass (they favour the juicy base of the stalks) and the occasion bug or grub. When predators and mammalian herbivores were introduced to New Zealand, they had a dire effect on this bird. Stoats liked to devour the plump chicks, and the deer ate their grassland. In the 19th century, only 4 takahes were seen and in 1930 they were declared extinct. RIP, the Takahe, another victim of human invasion.

But that is not the end of the tale.

A scientist named Dr Geoffrey Orbell refused to give up, refused to believe that this sumo-wrestler of a rail was gone for good. He roamed the Murchison Mountains of Fiordland, hunting high and low for any sign.

In what is now known as Takahe Valley, a population of 250 of these birds was found. And they still remain there today. But they are elsewhere now too. Thanks to the determined efforts of the Department of Conservation, Takahe can now be found on some of the predator-free offshore islands. They are still low in number, however, and being long-lived have a slow breeding cycle. So they're not out of the woods yet.
Posted by LemurKat at 10:18 PM

I love this. I saw the takahe in Zealandia and I fell in love. This picture captures the way they appeared to me. This is the perfect style for them.