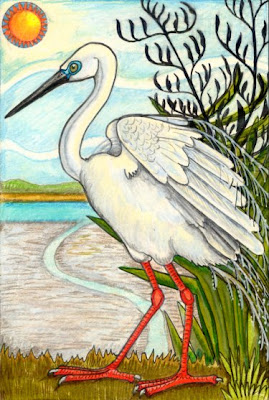 The White Heron is a magnificant, cosmopolitan bird. In New Zealand, it is known as the "Kotuku". It is quite a rare bird, having been nearly eliminated last century for its white breeding plumes, which was the fashion of the time. Thankfully now, that fashion has passed and the Kotuku is now fully protected. During most of the year, Kotuku are widespread across the country, where they fish in estuaries, rivers and lakes. But in August, they begin on a journey to a little place south of Hokitika called Okarito. Here, despite efforts to wipe them all out for their feathers, is the only breeding place for this special, sacred bird. In preparation for breeding, the magnificant plumes grow in and the males build breeding platforms before trying to impress the ladies with both their fine plumes and their construction skills. Once the mate has been chosen, up to five eggs are laid in the well constructed platform nest. The young fledge a few months later and the birds depart the breeding site in January.

In Maori myrhology the Kotuku is an inhabitant of the spirit world and is considered rare and beautiful.
Posted by LemurKat at 7:18 AM